Table Saw Vs Chop Saw: Diyers Will Probably Suffice by One of Them

Today, we’re going to take a look at two of the most sought-after products: table saw vs chop saw. While professional workshops usually have both, DIYers will probably suffice by one of them. Can’t make up your mind? Well, I’m here to help! Continue reading to find out how these two saws differ from each other.

We can’t be grateful enough for power saws. They’ve recently been rapidly increasing in complexity and versatility, which allows DIYers and professional workers to create large projects with relative ease.

To keep this article nice and tidy, I’ll start comparing both types of saws based on design, features, uses, etc. This way, you should be able to pinpoint the differences and pick the saw that would work the best for you.

It doesn’t take an expert to tell the table and chop saws apart. They come with notably unique builds that are optimized to serve different sets of functions.

Professional and heavy-duty workers use models that stand by themselves. These models usually have a large working area that accepts longer and wider pieces of wood.

The cutting blade protrudes out of the working area through a slit. Through an auxiliary motor, the blade can be lowered and raised to facilitate the cutting operation.

The models dedicated to amateurs share the same gist and blade functionality. However, they’re usually built as small, compact tabletop units. And as you can tell, it’s not logical to expect them to be that powerful.

Chop saws feature a drop-down build with a circular blade. Unlike table saws, you won’t typically see the same versatility with these ones. Brands compete in enlarging their sizes and strength, but they rarely deviate from the tabletop design.

They always have a large handle with which you can lower the cutting blade onto what you’re cutting. And obviously, there’s a large slit in the working area in which the blade enters.

To protect the user, chop saws often have a swiveling guard built over the blade. This ensures that no shrapnel or splinters can reach the user’s eyes. Nevertheless, it’s always mandatory to wear your usual safety gear.

Analyzing the blade material should tell you everything you need to know about the differences in uses.

It’s important to note that you can find lots of different blades with varying strengths and various applications. But to keep things simple, I’ll base my comparison on the default, most common choices.

Most table saws come with basic circular blades with moderately cutting teeth. They can efficiently cut through different types of wood with all sorts of thicknesses. But they may get severely damaged if you attempt to cut through metal.

Nearly all chop saws are equipped with large, abrasive discs that can go through almost everything. They may or may not have sharp edges and cutting teeth; this primarily depends on the brand.

Due to their limited adjustability, both table and chop saws can be a bit unsatisfactory for people who want delicate, precise cuts. In this case, you won’t find anything better than miter saws.

But to be fair, table saws are slightly better than chop saws at this point.

In elaborate models, the blade of table saws can tilt inside a limited range to make bevel cuts. And although they’re not capable of making miter cuts by default, you can achieve pretty amazing results by getting a standalone miter gauge. But making compound cuts would be extremely hard, especially when compared to miter saws.

With chop saws, you’re basically limited to 90-degree, straight cuts. Some models can make miter cuts, but the results aren’t that great most of the time. Also, it’s technically impossible to make bevel cuts with this type.

Comparing the size of the two models can be a bit tricky. As I said earlier, table saws can be built as self-standing or tabletop models. And because chop saws are only available in tabletop forms, many people think that table saws are generally pricier.

If you compare the same designs, you’ll find that the price difference isn’t that significant. Tabletop models usually cost about $150. Larger table saws can cost more than $500. Opting for reputable brands, like Bosch, will probably fatten the price tag even more. 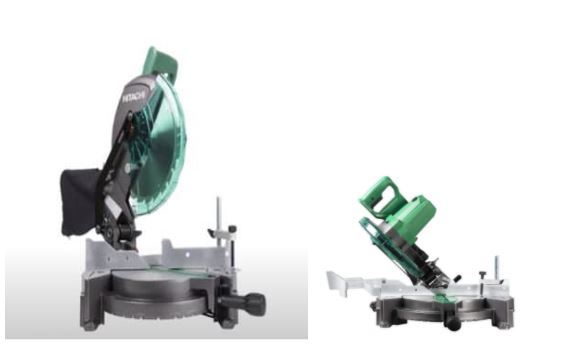 A Word About Miter Saws

Like I said earlier, table saws and chop saws are so different that nobody would be confused between them.

However, people are often confused between chop saws and miter saws. In fact, as I was researching this article, I stumbled upon a bunch of authors that used them interchangeably. And although they share a strikingly similar build, they can be notably different in uses and performance.

The most crucial difference between miter and chop saws is in the blade adjustability.

Chop saws are only capable of making straight, 90-degree cuts. On the other hand, miter saws typically have built-in miter and bevel gauges that can make a cross, miter, bevel, and even compound cuts.

That’s why it’s quite common to see miter saws inside personal workshops. They serve as highly versatile tools that can prepare pretty much everything you’ll need in your home. Chop saws, contrastingly, are often bought by heavy-duty professionals that work in specialized industries.

Video: Table Saw vs Chop Saw vs Band Saw vs

The Verdict: Which Is the Best Option

Chop saw vs table saw? I’m afraid there’s no one-size-fits-all answer here. It’s not about which is the “best”; your choice should be based on your needs.

Chop saws will be ideal if you want to cut through metal tubes or wood boards with nails. Their robust motors and large, abrasive blades would cut through almost anything.

But since chop saws don’t tilt or swivel, using them for bevel and miter cuts would be somewhat hard. In this case, table saws will be a bit more convenient. They’ll also finish large products in a shorter time thanks to their larger working areas.

Remember, whichever you choose, make sure to take all the necessary safety precautions at all times.