Recip Saw Vs Jigsaw: Which One Should You Buy for Your Next Task? 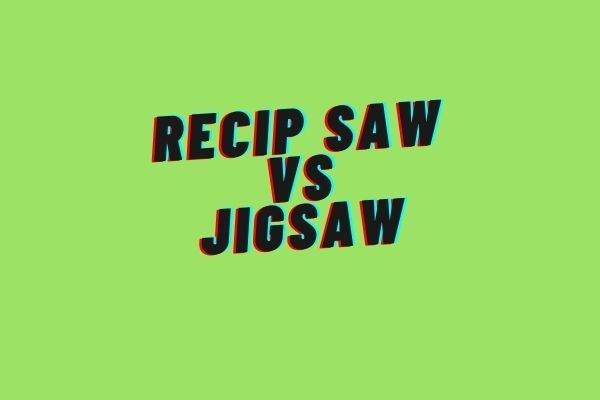 Recip saw vs jigsaw; which one should you buy for your next task? Whether you're cutting large chunks of wood, remodeling your house, or doing any task at a job site, you'll need to be fully equipped with the right saw.

When it comes to saws, you can easily drown among the various market options and their different uses. Here, we'll discuss the difference between reciprocating saws and jigsaws, and we'll list the uses for both so that you know what you should aim for.

Recip saws and jigsaws don't have visible similarities, and they don't work in the same way.

The only feature they both share is the blade and its positioning in a tight space. Other than that, they're as different as apples and oranges. Let's see an overview of each saw. 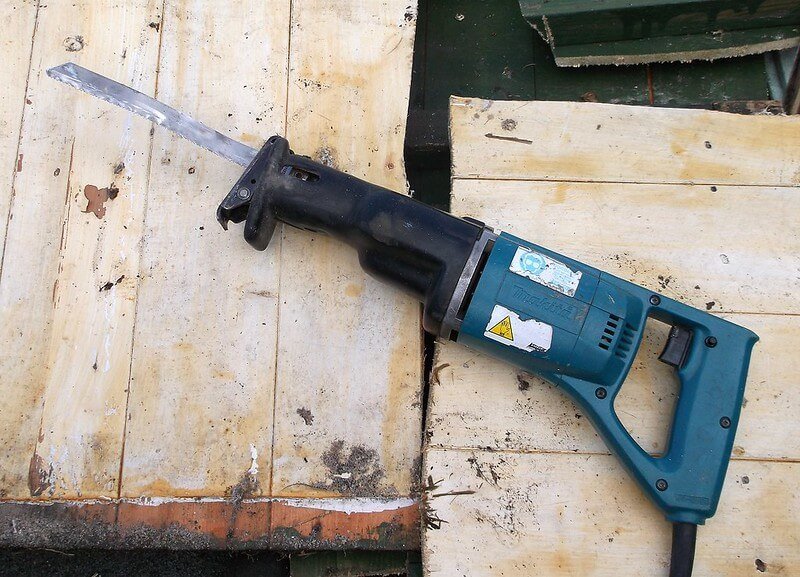 Reciprocating saws, or Sawzalls, as some people like to call them, get their name from the backward and forward motion of their cutting stroke. They move in a push/pull motion, and they're mostly used for power tasks rather than precision cuts.

These saws deliver immense power through their blades, making them able to cut through plenty of hard materials, including ceramic, wood, masonry, metal, fiberglass, composites, and drywall. That's why users usually use them for demolition works.

Recip saws mostly perform straight cuts. However, some high-end ones have a four-position blade clamp. It allows you to attach your blades in four different positions: normal insert, upside down, left, and right. As a result, it allows several tasks, including flush cuts. 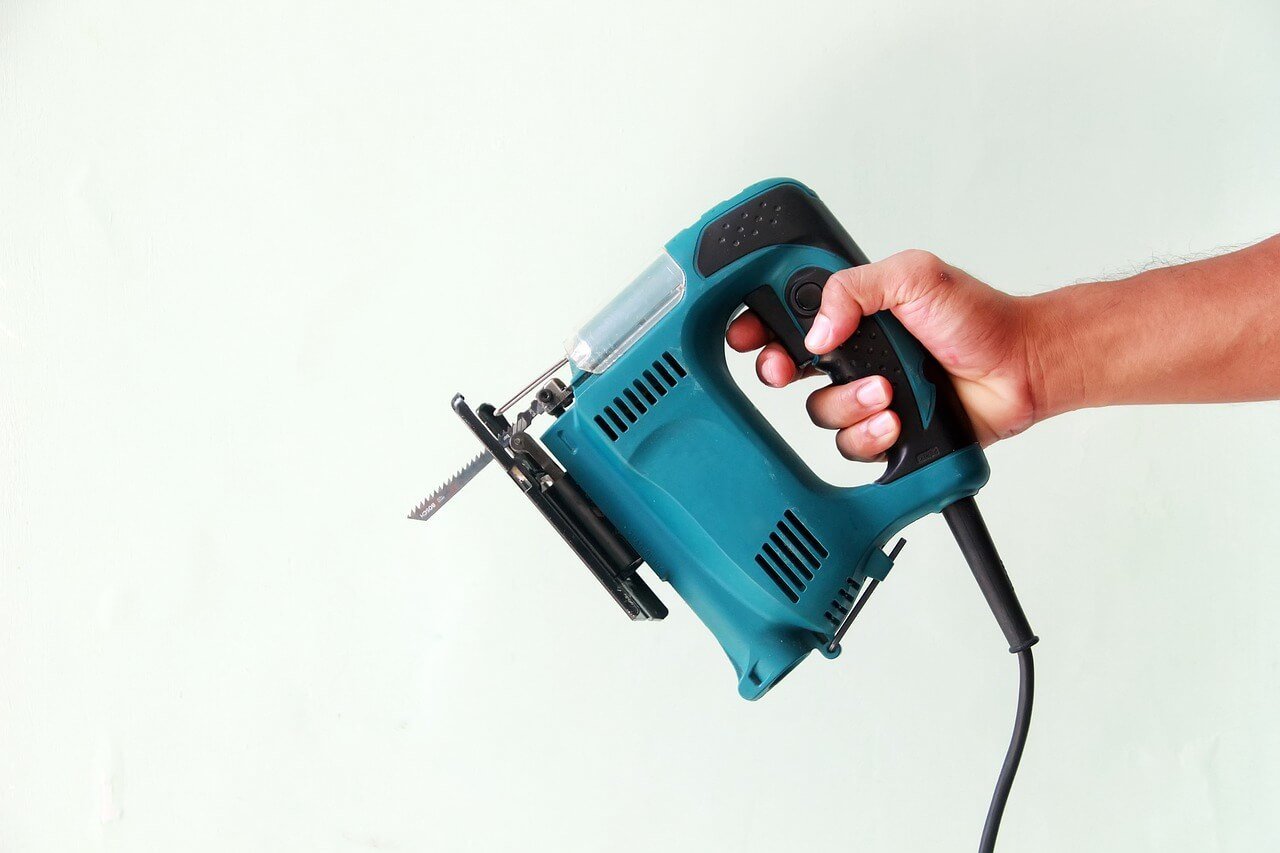 Jigsaws are used on tabletops, and they look strikingly similar to sewing machines. In fact, Albert Kaufmann did the first jigsaw out of a sewing machine, but that's a story for another day.

Jigsaws perform their cuts in circular motions, and they're mostly used for tasks that need high accuracy. If you're working on an intricate furniture piece, a jigsaw is your go-to.

Recip saws are more powerful than jigsaws because their applications demand high power, but they cannot do the same accurate details. On top of that, jigsaws can still cut through some metals, drywall, woods, and aluminum.

Most saws share a couple of features, such as the blade and the motor, but different types have different tweaks for their applications. Let's see the primary features of reciprocating saws and jigsaws.

Power tools of the same category typically have some standard features that are present in all models, no matter that brand you're buying. In the case of reciprocating saws, there are three main features: the blade, the motor, and the stroke length.

There are plenty of blade types for reciprocating saws for different materials. They may differ in the material, shape, or number of teeth per inch, so there isn't a standard blade we can refer to.

As for the motor, reciprocating saws have electric motors. They're either brushed or brushless, depending on the brand and the price. Brushless motors are more powerful, but they cost more.

Lastly, the saw's stroke length is the distance the blade travels to make each cycle. The longer it is, the faster and more powerful the saw is.

Jigsaws have the same main features as reciprocating saws, including the blade, motor, and stroke length. All saws on the market have these features, but jigsaws come with some extra features that make them different.

For starters, jigsaws have variable speed options because they cut a variety of materials precisely, and they're not all cut at the same speed. Additionally, these saws come with LED lights that give clear visibility to the worker. Most tabletop saws came with these lights, and some traditional ones come with laser systems.

Video: What Type of Saw Do I Need for Which Job?

Uses of Recip Saws and Jigsaws

As you've seen, reciprocating saws and jigsaws only share some minimal features, and that doesn't mean they work similarly. They have very different applications; check them out here.

Pruning is the act of cutting low-hanging branches off the tree to prevent them from falling off. Now doing that with a jigsaw would be a sight to behold!

Tabletop saws can't be used for pruning because they're not safe or suitable, so the reciprocating saw wins here, especially considering its high power.

Some jigsaws may not be powerful enough to cut through tree branches. Generally, outdoor tasks are left for reciprocating saws.

Remodeling tasks usually have intricate details and curved lines, which need a jigsaw. A reciprocating saw can only move in straight lines, which won't work for most remodeling jobs. That's why a jigsaw should be your obvious choice; it'll outperform any other saw.

If your remodeling job includes plywood or PVC pipes, a jigsaw will be able to handle them better because it'll cut them evenly and without a mess. Meanwhile, reciprocating saws will chew straight through the material.

Tearing stuff down needs a fully-fledged, reliable reciprocating saw. These saws can deliver more power than their counterparts, and they mostly have larger blades to cut through harder materials.

You can cut through thick drywall and cabinets using a reciprocating wall, and you'll do it without a hitch. You can do some demolition tasks using a jigsaw, but you may break a blade or two. Plus, it'll perform at a much slower pace than a reciprocating saw.

Recip saws and jigsaws have different applications, and they don't look the same. However, people mostly get confused with power tools in the same category, so it's only natural you don't know the differences.

Now that you know, I trust you'll choose the right saw for the right application.