Jigsaw Vs Bandsaw: the Main Differences and Best Usage 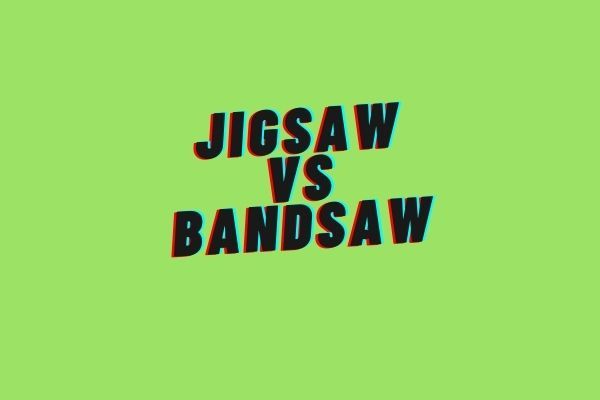 Whether you’re creating a woodworking workshop or lining up the necessary tools for a DIY, it’s best to know the ins and outs of the various devices. Here, we’ll analyze the differences between jigsaw vs bandsaw and what each machine is used for.

We often hear people asking whether they can buy one instead of the other? Or are they both necessary for regular woodworking? Read on to know the answer to that and more.

A handheld bandsaw could be quite similar to a jigsaw. And they do have a few traits in common, like making crosscuts and tracing curves. There are some major differences, though.

We’ll start with how each saw works, then compare their individual performances. Finally, we’ll summarize the best usage in easy to remember bullet points.

Saws cut wood, right? Absolutely, but there’s a reason why we have so many types of saws. Each one works in a distinctive manner and helps you in making various types of cuts effectively and efficiently.

A jigsaw is a fully portable handheld saw. It has a reciprocating thin blade that’s placed perpendicular to a base plate or a shoe. This metallic base helps in stabilizing the saw as you do straight or curved cuts on a workpiece.

It can also cut internal shapes, and that’s a unique feature for this saw. If you’d like to see a nice example, the DEWALT MAX XR Jigsaw is a work of art. It doesn’t come too cheap, but it’s totally worth the cash with its neat cuts and thoughtful features.

The bandsaw has a circular blade that revolves quite quickly in orbit. You’d often see a segment only of the blade, and it looks pretty straight, so the circular concept might be a little hard to imagine.

The typical setup of this saw is the benchtop arrangement, where you can use accurate pieces of wood in straight or curved shapes. Its blade is often long, so you can work on thick slabs of wood or stack several pieces, one on top of the other. A good example is the WEN Benchtop Bandsaw.

There are portable models of both saws, but the jigsaws are almost always smaller and lighter. In addition, the massive benchtop bandsaws offer the most benefit, and these are significantly larger than jigsaws.

Generally speaking, a bandsaw gives much cleaner cuts. It’s designed to stabilize a wood piece and cut through it with a powerful blade. This, of course, applies to the benchtop variety only. The handheld bandsaws are less accurate as they depend on the movement of the operator and the stability of the wood piece.

Jigsaws are typically handheld, and so they’re only as precise as their user’s ability to stay consistent with the cut.

The blades are usually good for just cutting but not for providing smooth surfaces. However, a clever choice of blade could give you a neat cut. Also, if you’re using hardwoods, you’d often get neater results.

This is one of the main areas where a bandsaw shows its muscles. A jigsaw can only cut a piece of wood that’s an inch shorter than the blade length. This often amounts to a thickness of around 3 inches.

A bandsaw can take much denser chunks of wood or even a stack of wood pieces at a time. Some bandsaws are expandable via installing an extension kit, and some are already pretty high, like the phenomenal Grizzly Extreme. This beast has a 12-inch sawing capacity, and it’s normally used in construction work and large workshops.

The main limitation for the jigsaw is the blade length, which caps the allowed thickness it could cut through. It’s also a little rough and needs thorough sanding or chiseling afterward.

The bandsaw is limited by two things: the first is the permissible size of the wood piece, as it needs to fit into the table. And the second is its inability to cut holes inside a wood board.

Many people assume that power tools are always expensive, but you can actually buy a jigsaw for around $30. Jigsaws typically go from around $50 for the basic models all the way to $200 for the big brand names.

Bandsaws are slightly expensive, as they often range from $200 for the handheld models to around $700 for the benchtop saws. The industrial ones could exceed the $1500 mark easily, but then again, they have very different capabilities.

Here we come to the practical aspect of this comparison. What can you do with each saw?

Jigsaws are fully portable, and they’re quite versatile. You can do the following tasks with them:

The Bandsaw benefits from having a table, a fence, and a long cutting blade. That’s why the best way to use it is in projects involving the following:

If I need to buy just one saw, should I get a jigsaw or a bandsaw?

Most small to medium projects require light sawing that doesn’t involve extra-thick pieces of wood. That’s why a jigsaw would be sufficient. Besides, you can cut holes with it, use it for other materials, and it comes at a budget-friendly price.

Can I use a jigsaw for delicate decorative pieces?

Jigsaws aren’t famous for their accuracy, but with the right blade, you can get some decent cuts. Extra-tight designs are a bit more demanding, though, and it’s best to cut them with a scroll saw.

The best feature of a bandsaw is its accuracy. And that’s best achieved with a machine that’s fixed to the workbench. Once you start using the handheld variety, it becomes a much bulkier clone of the jigsaw. And it still wouldn’t holes in a workpiece.

Jigsaws are great for making holes, and they’re quite easy to carry around everywhere. While bandsaws make impeccable cuts through stacks of wood, and they’re pretty good with curves as well.

Both power tools have useful traits, and if you have the financial ability to include one of each, then you should do that.

As always, work safely, be innovative, and create amazing things!